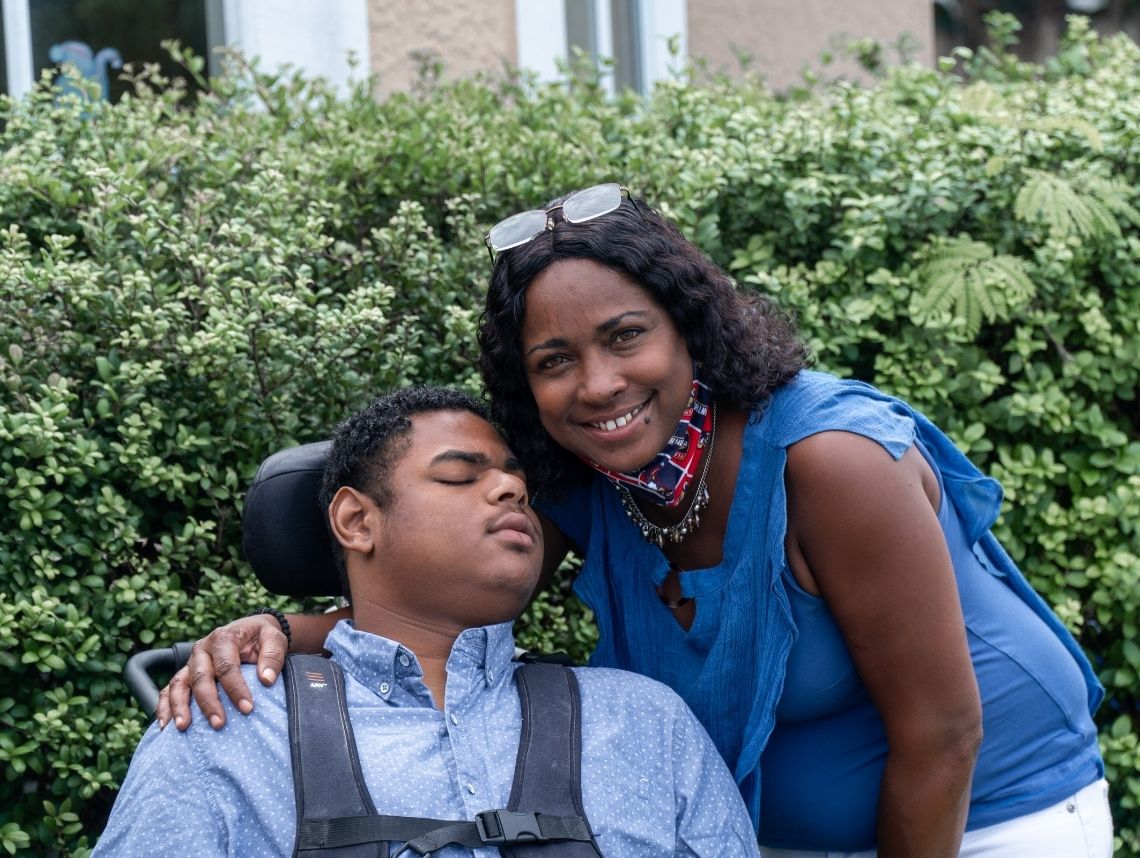 While this photo was taken during COVID-19, safety guidelines were followed in adherence to CDC guidelines.

On July 20, 2000, Kimberlee Brinson was driving, with her 10-month-old baby, C.B., safely secured in his car seat. However, they were involved in a catastrophic accident that caused C.B.’s brain to twist on the brain stem — leaving him permanently disabled and non-verbal. Kimberlee gets teary-eyed when she recounts the experience.

“He was in a coma for a year and a half. After that, he would wake up and go to sleep, but when he was awake, it was like he was still in a mild comatose state.” She recalls that even before he woke up from his coma, doctors told her that it would be unlikely C.B. would live past infancy.

“They actually gave me paperwork to authorize them to disconnect him from life support,” Kimberlee recalls. “They told me that his prospects were so grim, that it would be the best thing I could do.”

Despite the doctors’ predictions, Kimberlee couldn’t bring herself to do it. “I decided I wanted a different doctor — one who had more faith in my son. And I’m glad I did, because this past October, he just turned 21.”

Kimberlee’s experience raising C.B. has come with many challenges and dark moments. “I have to say, first and foremost, when we first had this situation in our lives, it was devastating for me as a mom. I just really honestly didn’t know how I was going to do it. But I knew I had to do it because this is my son.”

She also explains how, when she looks at C.B., she knows he understands they’ve had difficulties. “Sometimes, when I wake him up, or give him a bath, or his meds, or sing to him, I sometimes feel like I can’t go another day. But then he looks at me with this expression. One that says: ‘Mamma, I’m ok.’ He has this way of reaching out and hugging me. And then I start thinking how dare you give up or be depressed when he has been through so much, yet he still has so much light in his eyes and a smile on his face?”

When talking about her experiences with Sonas, she tears up again. “Since we had our accident when my son was just a baby, I’ve needed home healthcare help his whole life. And I went from company to company because it was obvious many other home aides would see him as this object — not as a person. I would sometimes hug him and I could tell they didn’t bathe him well, and he’d just look sad.” That was when she started researching other companies and came across Sonas.

“He has two home caregivers, Jacob and Fanio. And from the moment they both met C.B., they immediately treated him as a person, as a friend. Not as a file, or a case, or a summary of medical issues. They made eye contact, talked to him: ‘Hi, buddy! How are you doing?’ and you could immediately tell that C.B. appreciated that”.

Kimberlee also recounts some of her most memorable experiences with Sonas. “C.B. loves music. His favorites are classical and jazz. You play it to him, and he calms down, stares off into space as he listens. And he smiles. As soon as Jacob realized it, he started bringing his violin to his shifts, and he plays music for him,” she says in wonder. “And you could tell that C.B. noticed a difference between live music and what he hears on TV. He gets so happy whenever Jacob does that.”

As for Fanio, she recalls another heartwarming story. “One day, Fanio was taking care of C.B., and I heard something I hadn’t heard in years — I heard my son laughing out loud. I immediately stopped what I was doing and thought, did I imagine that? But then I heard it again, so I ran to his room, and I saw that Fanio had moved C.B from his wheelchair to a reclining chair and they both looked like they were having so much fun,” she laughs. “I asked what was going on, and Fanio told me: ‘Look how much he loves this’, and rocked the reclining chair back and forth. C.B. immediately started laughing out loud again. A joyful belly laugh. And my eyes welled up. I was like: ‘Oh my God! Look at my baby! He’s laughing! I hadn’t heard my baby laugh like that in so long! I hugged Fanio. ‘Thank you so much for loving my baby!’ It just made me so thankful.

Kimberlee takes a moment to think about her life experiences. “When this first happened to us, it broke my heart in pieces,” she remembers. “But through the years of getting to know C.B., he’s been so inspiring”. She takes a moment, as she begins to tear up again. “Most of us have so many opportunities that he doesn’t have, yet, whether due to desperation, depression, or being overwhelmed by life in general, it’s so easy to become pessimistic. But my son has this energy and presence that helps you say: hey, let’s focus on the good stuff.”