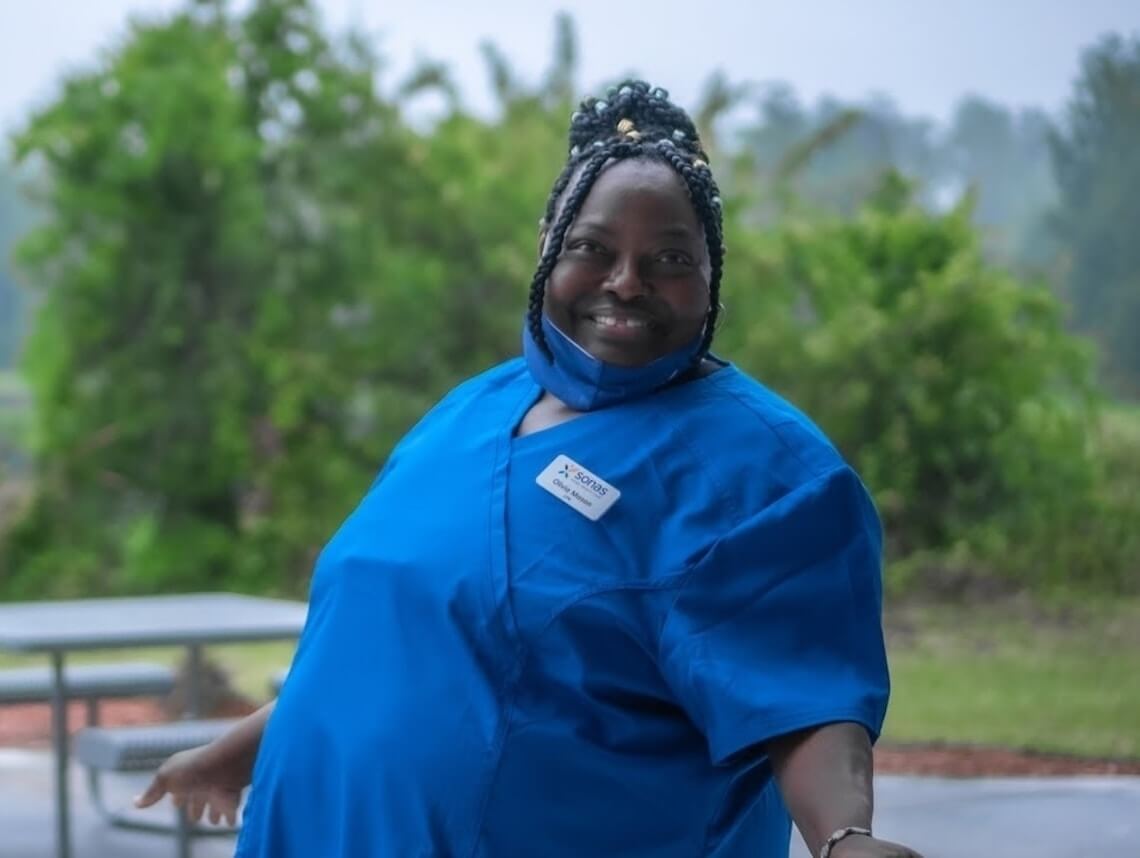 The nursing career isn’t for everyone. And, while most people may see that as a reason to stray from the career path, Olivia Mason saw it as a challenge to prove people wrong. Now, 40 years later, she’s thriving as an LPN in her nursing career and making a huge difference for her clients.

She began her career as a CNA working in clinical settings but quickly realized she didn’t like the facility atmosphere. That’s when she discovered home health care. Olivia describes her experience: “I love home health. It’s more personal. Instead of having 25 clients, [you have] the one. You can give that client the care that they actually need. It’s hard to spread that out during an 8-hour shift — or even a 12-hour shift — if you have 25 patients… home health is more for me.”

Olivia describes her path into nursing as a fluke. Originally, she was planning to go into radiology. But, there have been moments throughout her career that have reminded her why nursing is exactly where she needs to be. One such moment happened early in her career before she moved to Florida.

Her hometown in Kentucky was hit by a bad storm. The power had been knocked out, and it was unclear when it would be restored. But, Olivia was with a client who relied on a ventilator for suctioning the tracheostomy tube. Without power, the ventilator didn’t work. Typically, in these situations, hospitals would take patients requiring such services, but with the massive power outage, the hospital was already at capacity.

It’s a nightmare scenario that every parent and nurse fears. And, what Olivia did next goes above and beyond what any job description could prepare you for.

“[My client] needed suctioning. We’re talking about a life or death situation here. I suctioned her… with my mouth. Because I knew if I didn’t, she would plug. I gently removed her HME, and I slowly sucked. When she gasped and could breathe… that’s when I knew I was a nurse. And, when she was laughing and smiling, that was the best [feeling] ever.”

It’s clear that Olivia provides exceptional care to her clients. Working at Sonas Home Health Care, she’s provided this same level of care to her current client for more than a decade. She first began caring for him when he was six months old. Now he’s 12. Olivia has played a key role in his healthcare journey.

“When he started out, he was born a preemie. So, he required a vent and trach. Now, he’s off the ventilator. To see him grow, it’s a wonderful feeling.”

After being with her client for so long, Olivia has become part of his family. She’s seen the good, the bad, and the ugly. But, at the end of the day, she loves watching her clients prosper. Being with one client has allowed her to pick up on things you wouldn’t necessarily be able to pick up on in a hospital setting.

“There’s nothing like knowing a patient like the back of your hand. You can go in, and [they] could be playing and doing everything, but you’ll look at [them] and think, ‘something’s twerking here.’ Something’s brewing. You might not know exactly what it is, but you know that something’s wrong — because you’ve been with them for so long. And, then later that day, they might start coughing or sneezing. You don’t want anything to happen, but you’re glad you’re able to notice that. Because a lot of times they can’t tell you, so you have to be able to read them.”

Working in home health has not only lightened up her observation skills — it’s enhanced her life. As a Sonas nurse, Olivia receives PTO, 401K with company match, and full-coverage insurance. This takes a lot of the stress away when she needs to see a doctor and take care of herself.

“Best insurance I’ve ever had. I haven’t had to pay for anything. There’s nothing like going in and waiting to see what the co-pay is going to be, and they tell you zero. That is wonderful because you can’t take care of a client unless you take care of yourself. There’s nothing more reassuring than to know if something goes wrong, you’re covered.”

Despite working on her own in the client’s home, Olivia knows that Sonas is behind her to provide full support. Whether it’s adjusting her work schedule or requesting additional PPE, Sonas has her covered.

“It’s wonderful… I can call them for anything. There has not been one moment that I was not able to reach [Sonas]. They’re always there. It’s a great team. They listen to what the parents need. They listen to what their employees need. Because you can’t have a good company if you don’t have good employees. And, you won’t have good employees unless you’re a good company. It’s just as simple as that.”